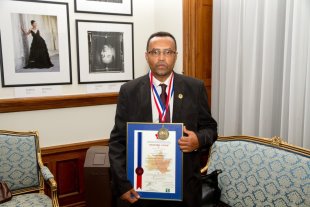 At a time we Eritreans are going through difficult times and sad news is by no means scarce, it is necessary and national obligation to appreciate and highlight any good news and achievements, instead of turning a blind eye to national assets and their extraordinary performance. In November 2013 an aspiring, bright, energetic and very positive Eritrean artist got recognized and received an award of appreciation here in Toronto, Canada. Furthermore, in 2011 his photography was selected by City Guide Toronto and by Skill for Change Toronto, whereas in 2012 by International Toronto Jazz Festival for Exhibition.

Only a few concerned Eritreans talked about these remarkable successes, and though late, they felt it is worth sharing with the public in general. We have known Mulugeta Zergaber, who is called Muller by his friends, for over three decades. It is an honour and a privilege to write few lines about him and introduce him to the Eritrean public, so that the desired recognition encourages him to make more contributions and aspire higher in his superb expertise.

In mid-November of 2013, as indicated above, this highly talented Eritrean, received the prestigious Photojournalism Award from the Honorable David C. Onley, Lieutenant Governor of Ontario, Canada. Those of us who knew Muller very well were not surprised to witness he finally got recognition for his talents and unique skills. Some of us knew Muller since the early 1980’s and are living witnesses to his long-time dreams and aspirations.

By way of presenting his background, it is worthy of mention that Muller was forced by the war in Eritrea to quit his studies and flee to Kassala in the Sudan in the early 1980s. As it is known to everybody, the Sudan has always become the major springboard or point of departure for the Eritrean youth to the West. That move, constituting light at the end of the tunnel, opened a window of opportunity for him to pursue his personal dreams for career and academic entry. To that effect, Muller immigrated to Canada in 1986, where he seized the opportunity to go to college and study Graphic Design. After successfully completing his studies and graduating with distinction, he continued his education, specializing in Digital Media. 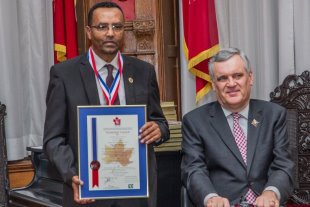 Muller, who has eventually become an artist of high caliber, generously volunteered his time and skills in photography, recording so many social, cultural, religious and political events for the Eritrean community. Despite the fact that he is an ardent believer in freedom, social justice, equality and democracy, he has never mixed his personal feelings or thinking with his professional duties. As a photojournalist, he did his job professionally, meticulously and objectively; maintaining strict professional standard. Financial benefit has never been his first motive during the journey of his career. On the contrary, many times he had to absorb his costs personally. We know this for a fact through our personal experiences with him and close follow-up. He has always been a phone call away for any event our community has organized; be it a public meeting, a religious occasion, a social or cultural evening, a demonstration against the Eritrean dictatorship or even a democratic conference outside Canada.  His volunteer work is well-recognized here at the Eritrean Community Center in Toronto and among the Eritrean democratic forces. It was his unique skills that had given life, breadth and depth to the messages and vision reported so far on the Eritrean websites about Eritrean opposition events in Toronto.  In spite of these formidable gifts, Muller is a humble, exceptionally quiet and approachable person who goes to a great length to help his folks at the time of need.

Muller’s skills are not limited to photography. He is also a gifted hand-drawing illustrator, though Muller and his camera are inseparable. He is always ready to snap a photo whenever an opportunity rises and is worth recording in a picture, confirming the saying that a picture is worth a thousand words. As far as we know, and he says it explicitly, he looks forward to a democratic Eritrea, where he would be able to exhibit all his works (to which he refers as “the history of the Eritrean struggle for democracy”) for the Eritrean people to see. Muller thinks loudly that the second stage of his contribution will focus on recording the democratization process in future Eritrea from day one.

As concerned Eritreans who knew Muller for decades, we are writing this news report and make it available to readers not for personal glorification of an individual but to share the good news that could hopefully inspire hundreds of his kind and confirm to them that hard work pays when a person pursues a dream with passion and determination. It is our sincere belief that when an Eritrean citizen who exhibits a rare combination of expertise, noble characters and love for his country is an eminently qualified recipient of a prestigious award in Canada or elsewhere, he should be recognized by the Eritrean people too. This is the way we could build our national capacity and prepare ourselves, as a people, for the long-awaited re-construction and democratization process of future Eritrea.  This is inevitable because no force of any dictatorship could stop the march of history. Thank you.