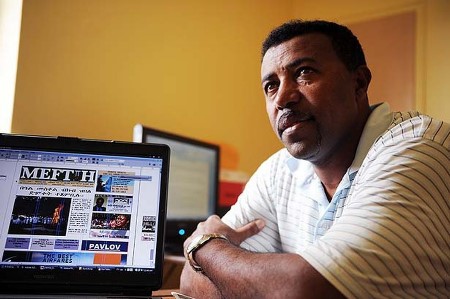 By Marco Chown Oved in Toronto

People flee Eritrea for many reasons - personal, economic or political  . Aaron Berhane did everything he could not to leave. But a clampdown on the media forced him to flee to Canada. It would take eight years but he was finally reunited with his family in 2010.

In a bustling coffee shop in Toronto, there's a whole section for beans from Africa: Ethiopia and Kenya - but no Eritrea. Dissident newspaper editor Aaron Berhane, he shrugs off the snub and orders water.

Berhane is tall, with hair that's greying a little around the edges but, when he smiles, his face softens and he instantly appears much younger.

It was this youthful optimism that pushed him to found Setite newspaper in Eritrea's capital, Asmara, in 1997.

"It was a political newspaper to influence the government and the people," he says. "Then, gradually, we began to get more aggressive and attack the propaganda of the government."

Only days after 9/11, Berhane says the world's attention turned to terrorism and no one was watching Eritrea. The independent press was shut down. Dissidents were arrested.

"At night, they just started to pick up every journalist, one after the other, from their home," he recalls. "But me, I was always conscious after they shut down my newspaper, so I never slept at home. So when they came, I was not there. Then, 'cause I just called home, my wife told me 'They are after you'."

Living in hiding wasn't easy. He changed his appearance, added some grey to his hair and obtained a forged ID.

After three months of living like this he decided to make a run for the Sudanese border - even though the risks were grave.

He drove as far as he could, ditched his car and set out on foot.   Everything was fine until...

"In every direction, we heard a very disturbing noise of guns - cha-cha-cha - stop where you are! When I heard that noise, I never hesitated for a second, I just ran to the land of Sudan. When the army realised that we weren't ready to surrender, they opened fire. I never ran in that speed in my life."

He ran all the way to Sudan, where he eventually made contact with the United Nations refugee agency . He soon moved first to Kenya, then to Canada.

In Toronto, with the biggest Eritrean community in the country, it wasn't long before Berhane went back to his old ways and started a new newspaper called Meftih.

Mohammed Edris worked at the paper for four years and says Berhane's story shows his commitment to the truth.

"Even when he came here, Aaron, he had so many difficulties or problems from the pro-government people," Edris recalls. "For me this was a man who is working for the profession, working for the truth. So it is something that I value a lot."

But it turns out that escaping with his life was the easy part. Back in Eritrea, his wife and family were put under surveillance. Their phones were tapped. their activities monitored.

Berhane's fight for justice started out as a political story but his flight from persecution turned out to be a love story.

It would take eight years before he was able to arrange to smuggle them out using the same route.

"Whenever I see people walking in the street, I always dream of walking with my children," he says."I became emotional. It was very tough, you know. It was not an easy road."

Berhane's Canadian newspaper Meftih went online only in January and now his words can once again reach the country he fled.