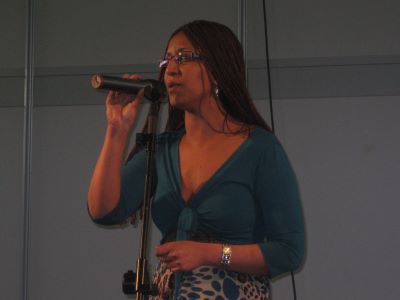 Bremen Germany May 26 2009-- The Eritrean Gospel singer Helen Berhane, participated in the 32nd German Protestant Kirchentag which was held from 20-24 May 2009 in Bremen. Besides her Gospel songs, Helen shared her experience for the Kirchentag participants.

On the 22th May she made her presentation focusing on her experience and the present religious persecution in Eritrea. In her presentation, Helen shared her experience what happened to her while she was in the Eritrean prison. She described it as a harsh and unimaginative torture which still suffering her mentally and physically. She stated that there are thousands of religious prisoners in Eritrea and they need our help in our prayer and campaigns.

After appreciating what the international human right organizations are doing to pressure the Eritrean government to change the policy against Christian churches, she stressed also more campaigns and prayer from churches and the people is required to solve the problem.

Moreover she called for all human right organizations and churches to help all Eritreans who are suffering in refugee camps and detention centres in Sudan, Ethiopia (shimelba), Libya and other countries.

Helen was in detention in Eritrea for refusing to denounce her evangelical Christian faith. She was arrested from Asmara and stayed for 32 months in prison. She suffered numerous beatings that resulted in severe nerve damage and has permanently impaired her mobility.

Helen was invited to the Kirchentag by a Germany organization called International Society for Human Rights (ISHR) which focuses on religious persecution. Helen was also a prize winner of this organization while she was still in prison in 2005 for her strong tolerance against torture. She got her prize last June in Frankfurt Germany.