Asmarino has been at the forefront of the fight against the Isaias regime. Much can be said about things it has not done and much can also be said about how it can improve. But there is one thing that can never be said about Asmarino: that it has lost its focus. As the old Negro spiritual sung during the civil rights movement had it, we in Asmarino.com have always kept “our eyes on the prize”. No side issues have ever detracted us so as to miss the whole point of our mission: to see the end of the authoritarian Isaias regime as soon as possible and to usher a free, democratic, and prosperous Eritrea where all can live in peaceful coexistence.

As challenging as the past 12 years had been, we believe 2010 and 2011 will the most challenging years for Eritrea. We believe there are certain critical events unfolding in Eritrea and the greater region that will determine the fate of our nation for better or worse. To mention just few of them:

These are some of the main issues that Asmarino intends to dwell on for the rest of the 2010 year and for 2011. For a more general picture on what Asmarino has been doing for the last 12 years and for challenges it faces in the near future, below we are reposting an article we wrote for the website’s 12th year anniversary.

Dear readers, it is crystal clear we could not have done anything without your moral and financial support. Asmarino needs you now, at this very critical stage, more than at anytime before. Please DONATE GENEROUSLY!


You can also donate by sending check to: 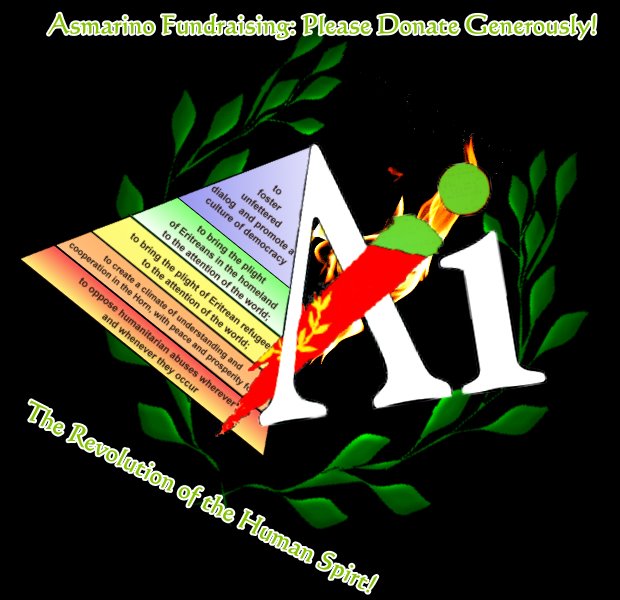 Twelve years is a lifetime for a website. As in an individual’s personal growth, Asmarino’s development went through various phases without altering the basic values it holds dear: its commitment to the Eritrean community both in Diaspora and Eritrea, its advocacy for basic human rights wherever and whenever they are violated and its firm belief that unfettered dialog would not only enrich us but also pave a way for a democratic culture in Eritrea. Therefore it is no surprise that, in its growth, Asmarino reflected the turbulence that the Eritrean community both here and at home underwent in these 12 years.

When Asmarino started in 1997, it was primarily meant to serve the Eritrean community both at the homeland and in Diaspora and to foster a climate of understanding and cooperation in the greater Horn.

By 1997, as it is now, the Eritrean community in Diaspora was facing a number of serious problems: lack of community centers, assimilation problem, identity crisis (especially among the young), juvenile delinquency, gang problem, generational gap, dating problem, family breakups, counseling shortages, etc. As one of its main objectives, the Asmarino forum was launched to address these and other similar problems.

Eritrea too, as a young nation, was similarly facing with a plethora of problems – humanitarian, social, political and economic. But there was a lot of optimism in the air, and Asmarino shared that optimism without being unrealistic of the realty on the ground. As such, the forum was also meant to be a venue where such problems could be discussed freely and openly.

And, last, Asmarino’s focus on the greater region early on its launching was derived from the recognition that globalization had arrived, and that the only way for the region to live in peaceful coexistence and mutual prosperity was by economic bondage to one another.

But the war, and the crisis in its aftermath, radically altered this three-pronged approach. First, the community-oriented feature of the website, although not totally abandoned, came to suffer as a result of the deep fracture within the Eritrean community that took place after the war. Second, Eritrea itself became off limits; and the dream of joining the Eritrean people in building the nation was indefinitely deferred. And third, as a result of the poisoned climate that came to prevail after the war, the idea of a greater community in the Horn and East Africa was abandoned. Instead, as is the case with most Eritreans, the political, humanitarian and existential crisis in Eritrea came to dominate the dialog in Asmarino – a debate that is still raging on.

Even then, the website remained non-politicized for years in that it provided a platform for both the opponents and supporters of the government to air their views without any restraint. But these days were not to last long, and this was not for lack of trying from Asmarino’s side. The PFDJ made explicit directives to its supporters that they were not to visit opposition websites, and consequently all government-supporting writers abandoned the website to a man. Even then, it took some time for the website to explicitly identify itself as opposition website. It took horrendous humanitarian abuses on the Eritrean government side for the website to openly declare that it would be fighting back tooth and nail, and that is what it has been doing ever since.

Throughout these turbulent years though, one particular feature in Asmarino’s journalism has remained the same: our forum still remains open to any idea, irrespective of its political or other affiliations. We believe that the only way to promote democracy is through example; tolerance should start at home. f

But the best way to look at Asmarino’s 12 years of service is by looking at many of the memorable moments it has captured: It was there when the border war erupted to record life in the trenches and the mass upheavals it caused. It was there to highlight the plight of almost a million of internally displaced. It was there to express its outrage when tens of thousands Eritreans were deported from Ethiopia. It was there heralding the happy news when a short-lived spring was witnessed, with a number of newspapers founding their voice. It was there to express its sadness when the nation turned authoritarian overnight, and the young nation’s democratic hopes were dashed. It was there to register one by one when reformers were imprisoned without seeing a day in the court of law. It was there to provide a helping hand when the famine of 2001/2 struck. It was there to tell the world when thousands of university students were carted off to the Wia’ concentration camp for exhibiting a mild protest. It was there to meticulously collect the names of the victims when a massacre was conducted in Adi-Abeyto. It was there to document the story of one moral giant, Abune Antonios, when he single-handedly fought back against the incursions of the PFDJ into the Orthodox Church. It was there to recount the horror stories that Evangelists told of their mass persecution in Eritrea. It was there in full support of sanctions against the Eritrean government, when such a daring stand was needed. It was there to shout and protest when hundreds of Eritrean refugees were deported from Egypt back to Eritrea. And, above all, it has followed every step of the despotic leader, Isaias Afwerki, to render him naked in front of the Eritrean audience by using his own words against himself.

In reliving these memorable moments though, we should not lose sight of the general tasks that the website is still committed to:

As in the physical development process of a single individual, Asmarino too has its own “physical” growth to undergo, as can be easily witnessed from the many faces it went through these years. This physical “growth” was mainly motivated by (a) the aesthetic appeal of our writers and readers, who usually demanded simplicity and sophistication at the same time; and (b) the need to catch up with the amazing technological advancement in the cyber space that we have been witnessing in the last decade.

It would be no exaggeration to say Asmarino has been catching up fast in utilizing these technological advancements maximally to serve its readers and to advance the cause that it stands for; in many instances, the first time user among the Eritrean websites. For instance:

It is true that in its evolvement throughout these 12 years, Asmarino has made many mistakes and undergone many interruptions; but, in the end, it has always come back with the conviction that this noble task is yet to be accomplished – the spirit of defiance in face of adversity lives on!

And, last, we would like to mention that Asmarino came to achieve what it has come to achieve because of its readers’ enthusiastic participation, its writers’ dedicated contribution and its sister websites’ cooperation.

Thanks to all, and please stay with us.